What is Ocean Protocol?

OCEAN is the ERC-20 utility token native to the Ocean Protocol, which it powers by allowing users to stake on data, partake in the governance of the protocol, and buy & sell data, all while allowing near-term growth and long-term sustainability.

Ocean Protocol was founded by Bruce Pon and Trent McConaghy in 2017 as a way to connect data providers and consumers using blockchain technology, boosting the emergence of the data economy and the creation of Web3 apps.

The project raised over $1.85 million during an initial round of funding in 2019, failing to meet the $8 million goals established by the team and leading to a second-round using an Initial Exchange Offering (IEO) using Bittrex in April of 2019, which raised $30.65 million in 3 days.

Ever since both Ocean Protocol and its token have experience growing popularity due to its innovative approach pulling from artificial intelligence (AI) and machine learning technologies. The protocol has been used by companies like Daimler (parent company of Mercedes-Benz), Roche, and MOBI.

The protocol doesn’t only use OCEAN but also datatokens, fungible ERC-20 tokens, to give access to data services provided by the protocol. The protocol also has the Ocean Market, an open-source community marketplace for data that uses AMM to determine the prices.

What is the Purpose of OCEAN?

The Ocean Protocol was created to create a decentralized exchange for data, becoming one of the most important tools for the creation of the Web3, boosting the transition towards an open, trustless, and permissionless internet.

Ocean uses blockchain technology and cryptocurrency to facilitate the exchange of data between consumers and data providers while providing a high degree of transparency and automation.

Data has become increasingly important to the global economy as more companies look for more ways to extract value from it to create all kinds of models, which has led to the data sources losing control and the possibility of monetizing the data they work hard to produce.

By using the protocol, data owners will regain power over their data while providing them with an incentive to ensure its quality and availability, facilitating the growth of a new Data Economy that allows the creation of more powerful dApps and platforms.

By decentralizing the ownership of data that has been established by tech giants like Google, Ocean would equalize access to information on a global scale while also ensuring it can’t be manipulated and its quality remains high, creating trust.

How Does OCEAN Work?

The Ocean protocol works by allowing its users to create their own decentralized data marketplaces, offering to exchange data with other users and preventing monopolies from forming in the process by removing intermediaries.

By using metadata stored in each datatoken that connects the data to its source and owner at every step of the process as well as tracking who it is shared with. This does not only provide the source with transparency on who is using the data at any given time but also provides more data that can be used to improve the quality of the data itself.

Consumers, on the other hand, can find the information they need by looking through the Ocean Market place and make use of it after paying the fees established by the owner. The protocol ensures the data is stored in a way that makes the data easily accessible, an important characteristic for data scientists and AI, and the conditions of the agreement are met by both parties.

Every transaction in this marketplace makes use of the OCEAN token as a means of exchange, with both data providers and consumers using it to obtain their part of the deal. By using OCEAN, the seller is both able to extract value from the data it is selling and take advantage of all the benefits that a cryptocurrency entails.

The token is also given as a reward to users who decide to act as curators by ensuring the quality of the data remains high at every point. They can do this by staking their tokens on the data they confirm to be good, earning a reward each time the data is exchanged.

Share events that occurred on Ocean Protocol's chart at any point in time.

That's all we got for #Ocean Protocol 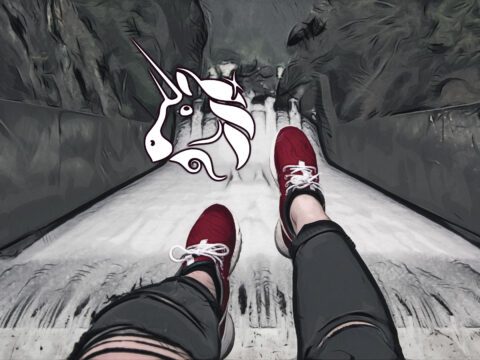