DAI is a cryptocurrency launched back in 2017 on the Maker Protocol as a stable lending asset for investors around the globe.

Originally maintained and created by Rune Christensen and the Maker foundation in 2014 as an open-source project., the protocol’s governance was transferred to MakerDAO, the decentralized autonomous organization that has controlled it ever since.

This stability is achieved by using cryptocurrency-collateralized debt to back its value, instead of requiring a company to custody USD to back every token. This is done by requiring borrowers to secure the loan using Ether (ETH) or other crypto assets they already own.

The protocol is governed in a decentralized manner, with the community making decisions depending on their holdings of MakerDAO’s other token: MKR. This allows all token holders to play a part in deciding the future of the protocol.

MakerDAO runs on the Ethereum network; therefore, DAI is an ERC20 token and can be easily transferred between Ethereum wallets.

The smart contracts regulating DAI’s value have proven to be so effective that the token’s value has remained stable without any major fluctuation that will make it stray far from its peg of 1 USD.

What is the Purpose of DAI?

DAI was designed as a cryptocurrency whose value was collateralized by other cryptocurrencies to eliminate volatility and provide an effective means for MakerDAO’s lending system to work.

While DAI is still fundamental for MakerDAO to operate, and vice versa, multiple use cases have emerged beyond its original purpose. In fact, MakerDAO is focusing its efforts on making DAI the first trustless mainstream cryptocurrency.

The token’s stable value and peg to the US dollar also allow for ease of use in “real world” scenarios. It allows its holder to spend it without worrying about changes in price or the need to do calculations at the time of spending.

Like other stablecoins, it is possible to use the token as a hedging tool or safe haven during times of market turbulence or when investors are expecting a crash, which also makes it an important tool for crypto investors.

How Does DAI work?

DAI is minted by collateralizing crypto assets into MakerDAO’s vaults, injecting DAI into circulation, and allowing the investor to gain liquidity in the form of the newly minted DAI.

This DAI will then be used as any other crypto or fiat currency, allowing people who are not actively using the lending system to benefit from it and incentivizing others to mind more DAI.

Every DAI token will always be backed by an excess of collateral, which ensures that changes in their value will have a lower impact on the overall value of DAI, allowing the protocol to benefit from the gain in the value of the collaterals and facilitating the stabilization of any fluctuation.

This stabilization is achieved by using a system of smart contracts controlled by the protocol instead of a single or group of entities, which create or burn Maker’s governance tokens (MKR) as needed when the fluctuation reaches a certain threshold.

This system also allows MKR holders to benefit from this fluctuation, as the more MKR is burned to stabilize the coin, the more value their holdings will have. This also incentivizes users to acquire the governance tool and participate in the decision-making process.

Share events that occurred on Dai's chart at any point in time.

That's all we got for #Dai 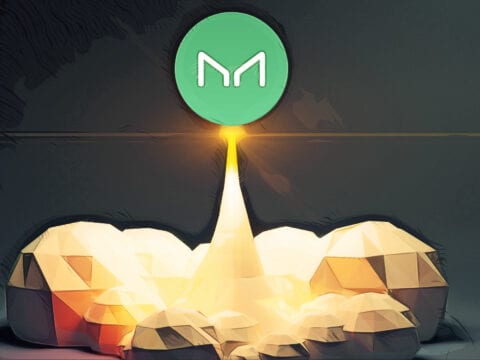