What is Synthetix Network Token?

Decentralized Finance’s (DeFi) success was one of the major events in the crypto market in 2020, attracting millions of dollars of investment and taking the whole ecosystem to its next step toward mass adoption.

Synthetix Network was created in 2018 by Kain Warwick and the Synthetix Foundation on the Ethereum Network. In 2020 Synthetix quickly gaining traction as one of the most important Decentralized Finance projects, overtaking popular projects like Compound, Maker DAO, and Dharma.

The network was originally designed as a decentralized payment network under the name of Havven and was powered by the HAV stablecoin. As time passed on, the team behind the project decided that the project could expand its scope, renaming it "Synthetix Network" in the process.

Now, the platform is focused on creating synthetic tokens, effectively allowing users to bet on the price of a cryptocurrency without the need to hold it. This can be done by collateralizing the newly minted synthetic token with Synthethix’s token: SNX.

The SNX token can also be used to earn rewards by staking using the “exchange rewards” and “staking reward” mechanisms, incentivizing users to hold their tokens and creating scarcity as a result.

The team behind the network describes Synthetix as “the backbone for derivatives trading in DeFi,” which may well be true as it has become the largest decentralized exchange for derivatives with a market capitalization of over 1.7 billion USD.

What is the Purpose of Synthetix Network?

As the name suggests, Synthetix network is a project that allows the creation of Synthetic digital assets (synth) in a network, which can then be pegged to another “real world” asset, effectively allowing users to create a digital representation of any asset which value can be tracked by using oracles.

An oracle is an entity, usually in the form of code, that connects a blockchain network with external data. This allows the blockchain network to feed itself from information that would otherwise be inaccessible, allowing them to process smart contracts based on it.

For example, a user might want to create a synth based on the United States’ dollar (USD). These synths would then mimic the value of the USD by receiving information from an oracle that tracks the USD value and feeds it to the network.

By doing this, users can use this synthetic asset to speculate, hedge, or gain access to assets that would otherwise be inaccessible. In essence, a synthetic asset is the crypto equivalent of derivatives in traditional markets.

How Does Synthetix Network Work?

Synthetix provides its functionality by making use of two tokens: The Synthetix Network Token (SNX) and Synthetic tokens (Synths). Both tokens are native to the network and offer different functionality.

SNX is used as collateral when minting synths using the protocol, while also allowing stackers to generate gains by collecting fees generated by synth trading in the exchange.

On the other hand, Synths are tokens which values depend on external prices collected by the oracles depending on the asset they represent. These tokens can represent Forex, commodities, crypto, or indices.

A user can mint a new synth by acquiring SNX and using it as collateral while maintaining the collateralization ratio (c-ratio) considered optimal by the protocol at the time (i.e., 750%). These synths will then operate as perpetual contracts.

For example: if a user wants to mint 100 sUSD, they will need to stake a total of 750 worth of SNX. As more synths are generated, more SNX is locked, and the more valuable the rest of the SNX tokens will be.

As investors are staking to create synths, they will also generate passive rewards in the form of SNX tokens that are distributed to all users who have SNX locked as collateral.

Synths can also be traded using the protocol just like other cryptocurrencies, allowing for speculation and other investment strategies while generating gains from staking.

Congrats to Synthetix for launching SNX #staking on optimistic Ethereum L2 mainnet. This marks a huge next step not only for Synthetix, but the entire Ethereum ecosystem, as OΞ is the first scaling solution with full cross-layer porting capabilities for smart contracts without rewriting them. blog.synthetix.io/...unch/ 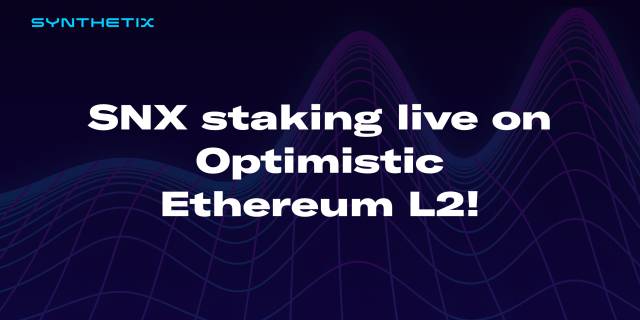 A guide on how to migrate your SNX to OΞ on L2!

That's all we got for #Synthetix Network Token